To all CFA and MFB members

A FANTASTIC TURNOUT FOR THE MINISTER – NOW FOR TUESDAY’S RALLY

With less than an hour’s notice, 28 firefighters turned out this morning to challenge Minister Jane Garrett over her misleading claims in the media overnight.

The Minister was at the Darebin RSL to announce a gambling initiative. But firefighters won all the media attention.

The messages for the media are that firefighters are sick of being misrepresented by this Government in its selective media leaks, and fed up with being 970 days without a new workplace agreement. This is distracting and morale-sapping. We just want a fair deal and to do our job. 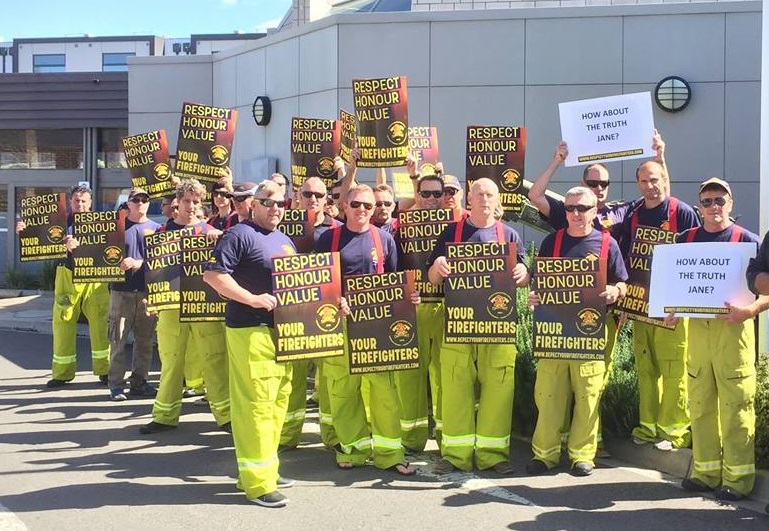 The Government hopes to confuse and divide us, and today’s attendance was an overwhelming sign that this is not working.

Next Tuesday we need every available UFU member at the rally to send a further strong message to Government.

This is probably the most important rally of your working life to date.

Buses are being organised to and from the rally.

Once again the message today from the Government was “greedy firefighters”: this time we’re getting an $47 million over three years.

The Minister says we’ve been offered 14.7% over four years. (The Herald Sun says it’s over three years.) But the proposed wage rise is from 2013 – when the agreements ran out, and when we had the last pay rise of 1.5% – to 2019. That’s six years, or about 2.4% per year. Most years this wouldn’t cover inflation – your wages would fall in real terms.

Yesterday’s CFA offer lacks details. There is a list of headings of conditions, but what does ‘code of conduct’ or ‘Board of Reference’ mean? Are they in or out? We had reached agreement on these, but last week in Fair Work the Government said it had changed its mind on these and a number of other clauses.

It’s time for the truth.