LEGAL ATTACK ON FIREFIGHTERS BY MFB

The latest MFB annual report has shown a further increase of up to $4.3 million dollars for the last financial year in expenditure on legal fees by the MFB. This out of control spending of public monies on highly paid lawyers is outrageous.

This is a grand total of $8.2 million dollars squandered by the MFB in two years of industrially motivated litigation against their own employees.

The MFB has confirmed that Fire Services Levy money is being spent on lawyers and consultants in its politically-motivated attack on firefighters.

MFB CEO Jim Higgins recently told a firefighters’ forum that there is no specific budget for legal expenses, and the Justice Department gives the MFB its share of the Fire Services Levy on a quarterly basis from the money raised by government from the property levy.

In an official video recording of the meeting (on the MFB intranet) he also conceded that he would prefer to spend the money on community safety.

“Would I prefer that we were able to commit to delivering on community safety outcomes? Absolutely,” said Mr Higgins.

He told firefighters: “… I agree with you absolutely that we could use the money to deliver community safety outcomes in preference to using it to fund expensive legal issues, so I agree with you.”

The new CEO’s statements are explosive and reveal that there is a direct disconnect from the purpose for which the fire service property levy is being collected as opposed to how the MFB is spending it.

It’s not new to members but we reinforce that since the Napthine Government came to power, the MFB has spent record amounts on lawyers and consultants.

The Napthine Government is spending taxpayers’ money to wage an ideological war on public sector workers including teachers, nurses, paramedics and firefighters.

Victorians should be outraged that their taxes are being used for political means – to attack firefighters, and to try to lower the current number of firefighters and trucks needed to protect Melbourne 24/7 – instead of being used for community protection.

Four years ago the MFB, firefighters and their union were working together to make the MFB the best urban fire and rescue service in Australia.

And then the Napthine Government came to power.

Napthine no doubt has willing henchman within the MFB rank, however history has shown that those that sell out their principles for personal gain are held long in the memory of history of which an indelible benchmark is forever in place.

Operational costs down, but spending on lawyers and consultants up

The MFB 2013-2014 annual report, tabled in Parliament, shows that spending on training and development, communications, uniform, plant and equipment maintenance, and supplies and consumables over the past year were DOWN.

But the cost of the major legal initiative of the MFB (the termination case), under the direction of the Napthine Government, will not show up until next year’s annual report – after the State election. (Perhaps, if one was a sceptic, one could believe that the MFB timed the payments to their highly paid lawyers so as that public scrutiny would not occur until after the State election – however only the MFB can answer that question).

To see the current increased legal and consultants costs of the MFB to date, please see the below graph.

Postscript (not to be forgotten):

But the MFB aren’t just spending on lawyers, the Fire Services Levy has also been used to resource an off-site bunker with senior MFB personnel. The lead executive, DCO Stacchino (former CFA executive) transitioned to a dedicated ‘bargaining’ role from 22 October 2012, almost 2 years ago.

Whilst particular executive salaries are not included within the annual report, the remuneration ranges are. The annual report lists 11 positions within the MFB at the DCO or Executive Director level and above.

For the highest paid 11 MFB personnel, total remuneration for the last financial year range from 230,000 to 299,999 each. Therefore the spending of fire service levy alone on just a lead executive would be estimated to cost over $500,000 in fire service levy over the last 2 years.

A conservative estimate on the cost of staffing the MFB’s Bargaining team (aside from consultants and legal costs) comes to $1.8 Million over the last 2 years. This does not include overheads, all employment costs and any costs in backfilling this significant removal of resources from MFB’s normal business.

What have the MFB bargaining group achieved in that time? They have practically refused to do any bargaining and instead spent more millions on litigation, whilst firefighters have continued in their efforts of doing the MFB’s real work of protecting the community. 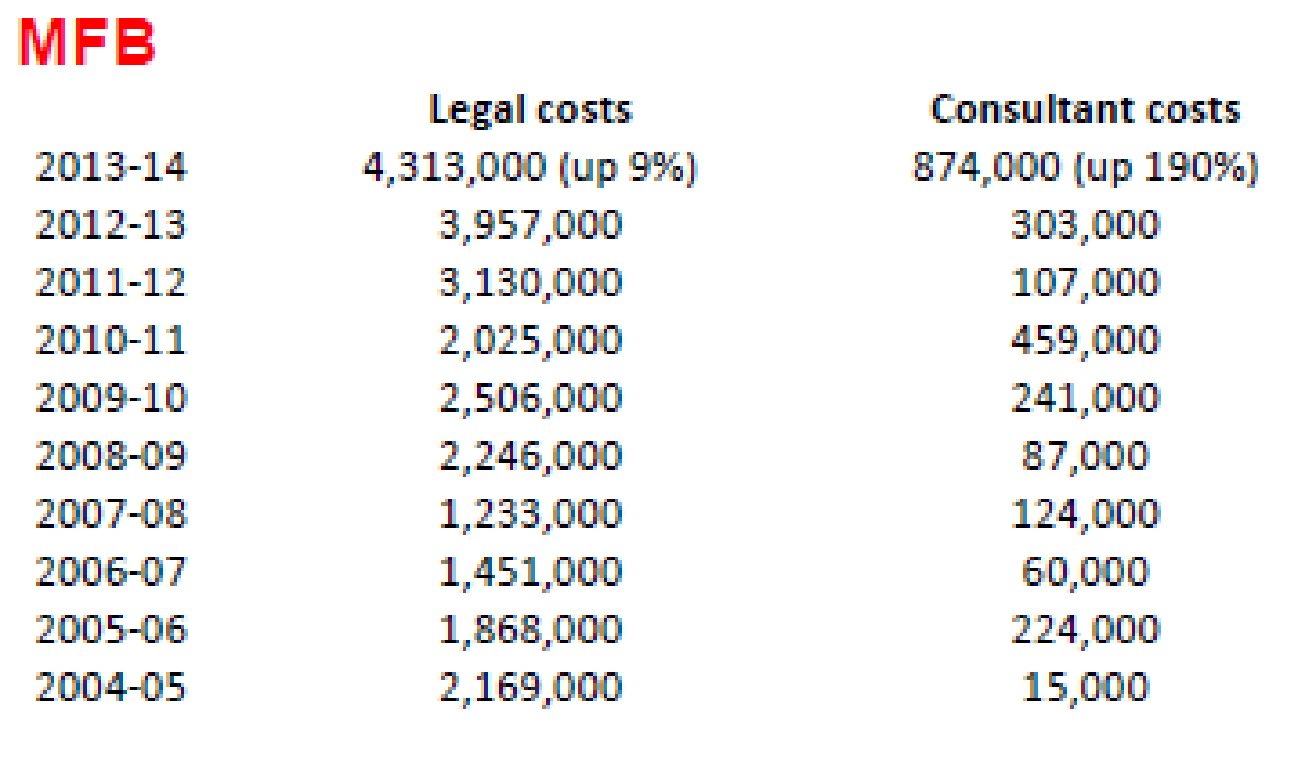 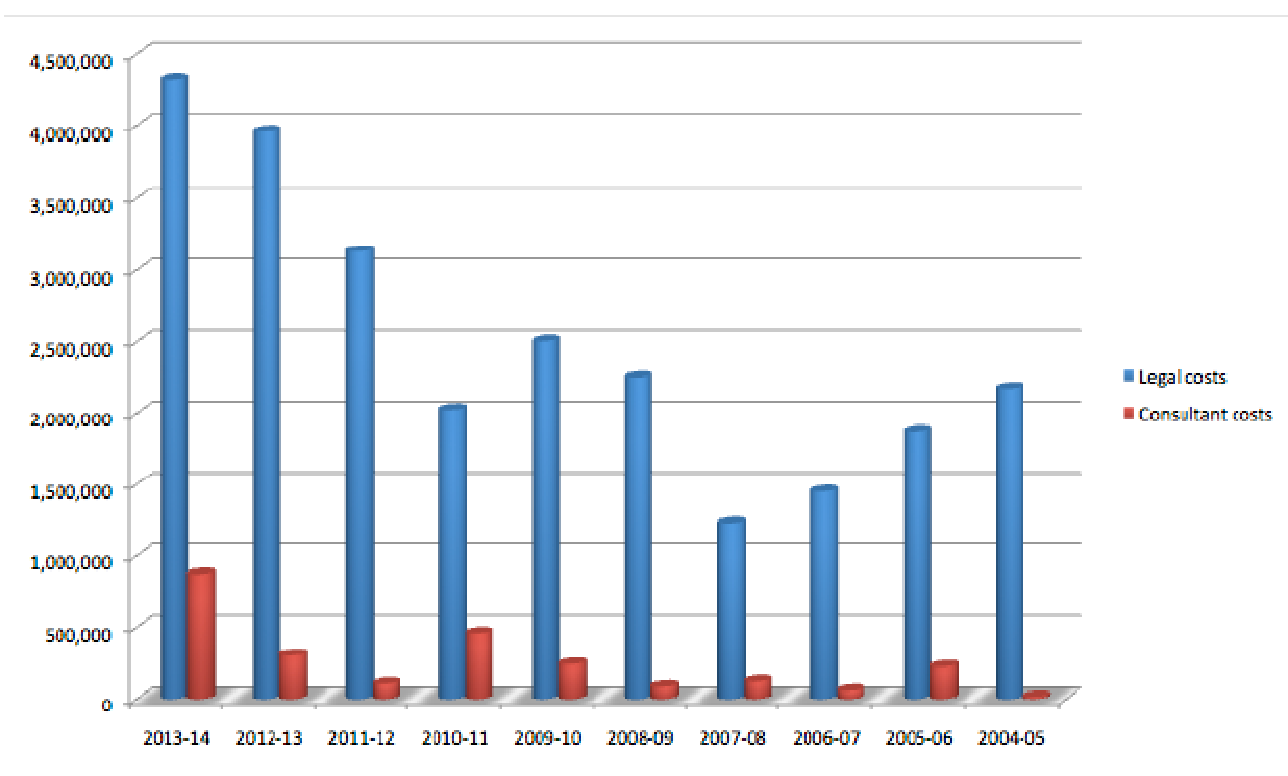